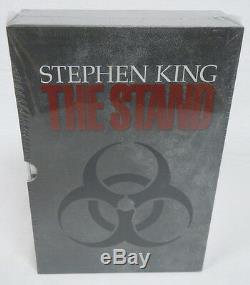 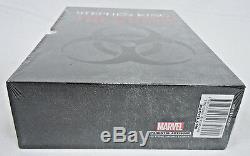 Up for sale today we have a Stephen King The Stand Omnibus by Marvel Comics. Here is some information about this volume: The Stand is a classic tale of good vs.

Evil, loss weighed against redemption and despair pitted against hope. It is an apocalyptic vision of man's battle to save life against a worldwide plague of death.

When the viral strain dubbed "Captain Trips" works its way across the face of the country, the painfully few survivors are launched into a nightmare that's only just begun - but for the Dark Man, Randall Flagg, it's a dream come true. Based on the masterpiece of apocalyptic horror by celebrated author Stephen King, this lavish adaptation is packed with extras in a two-volume slipcased set! Collecting THE STAND: CAPTAIN TRIPS #1-5, THE STAND: AMERICAN NIGHTMARES #1-5, THE STAND: SOUL SURVIVORS #1-5, THE STAND: HARDCASES #1-5, THE STAND: NO MAN'S LAND #1-5, THE STAND: THE NIGHT HAS COME #1-5 and THE STAND SKETCHBOOK. We have just bought out a warehouse of Omnibus Hard Covers, so please see our other auctions for more great deals on comics this week.

Thanks for looking, and have a great day. We now have lots of DC Archives, Marvel Masterworks, and other hardback books at discounted prices. The item "Stephen King The Stand Set Marvel Omnibus & Companion Brand New Factory Sealed" is in sale since Thursday, February 23, 2017. This item is in the category "Collectibles\Comics\Graphic Novels, TPBs".

The seller is "dheader" and is located in White Hall, Arkansas. This item can be shipped to United States.