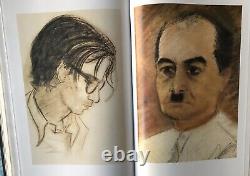 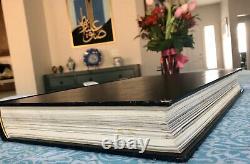 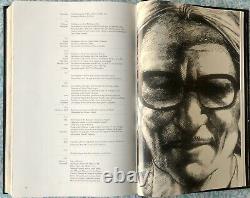 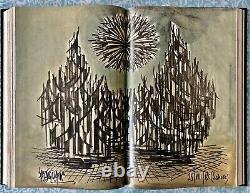 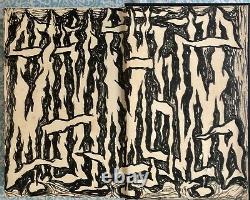 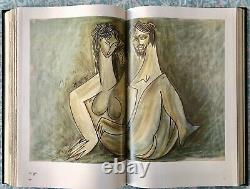 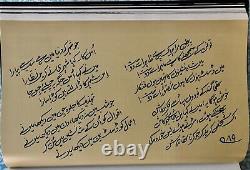 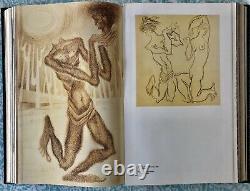 This is large sized scarce Coffee Table Book with is hard cover binding with 620 pages of 18 x11 inches & weighs about 15.9 lbs. Sadequain was born in 1930, descending from a family of calligraphers.

He was responsible for the renaissance of Islamic Calligraphy in Pakistan. He was one of the greatest calligraphers of his time who transformed the art of calligraphy into eye-catching expressionist paintings. Sadequain was a master muralist and his murals adorn the halls at State Bank of Pakistan, Power House at the Mangla Dam, Lahore Museum, Aligarh Muslim University, Banaras Hindu University, Geological Institute of India, just to name a few. After Sadequain transformed the art of calligraphy into a mainstream art form, most of the known Pakistani artists followed Sadequain, and calligraphic art now dominates the art scene. Sadequain also painted in bold form the poetic verses of Ghalib, Iqbal and Faiz, which illustrate his love for classical literature.

He belonged to the school of thought which enriched realism with lyricism. Sadequain wrote thousand of quartets and published them.

For example, his masterpiece rendition of Sureh-e-Rehman has been copied widely by many known painters of the modern era. Syed Sadequain Ahmed Naqvi, Tamgha-e-Imtiaz, Pride of Performance, Sitara-e-Imtiaz (Pakistani Awards), also often referred to as Sadequain Naqqash, was a world-renowned Pakistani artist, best known for his skills as a calligrapher and a painter.

He is considered as one of the finest painters and calligraphers Pakistan has ever produced. Sadequain was responsible for the renaissance of Islamic calligraphy in Pakistan. He claimed that his transformation into a calligrapher was manifested by divine inspiration. He did not follow the tradition and created his own style of script. His alphabets exude motion, mood, and paint vivid pictures of the message of the word. Sadequain claimed that many of his paintings especially after the seventies had been based on calligraphic forms to portray images of cities, buildings, forests, men, and women. Before Sadeqain, few painters had experimented with the medium in Pakistan. Sadequain is commended for bringing calligraphy into a mainstream art form, as most of the known Pakistani artists have followed Sadequain and calligraphic art now dominates the art scene. Sadequain also painted classical literature from the poetic verses of Ghalib, Iqbal and Faiz. Sadequain Illustrated French Nobel Prize winning writer Albert Camus, Ghalib, Iqbal, and Faiz Ahmed Faiz on large scale.

This item is in the category "Books\Antiquarian & Collectible". The seller is "ntiqueboutique" and is located in Redmond, Washington. This item can be shipped worldwide.