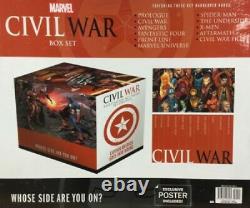 Rare and long out of print. Brand New all volumes sealed. Get all sides to the story of Marvel's most incendiary epic in this eleven-volume box set! When the New Warriors set off a deadly disaster in Stamford, Connecticut, the cry goes out for superhuman registration. With Iron Man heading up the pro-registration movement and Captain America leading the anti-registration camp, the Marvel Universe splits down the middle as friendships, teams and even families are torn apart.

From the key stories that set the stage, to the main event, to its headline-making aftermath, the entire Civil War is fought inside one glorious slipcase - including its dramatic impacts on the Avengers, Fantastic Four, X-Men, Spider-Man and everyone else on the Front Line! Plus: an entire volume of behind-the-scenes special features that take you inside the conflict. War - this is what it's good for! CIVIL WAR PROLOGUE PREMIERE HC.