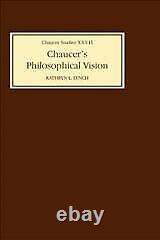 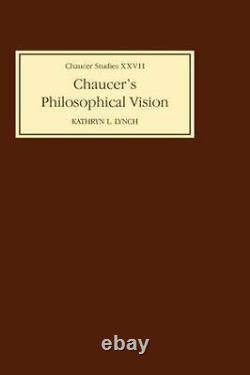 Chaucer's Philosophical Visions, Hardcover by Lynch, Kathryn L. Chaucer's Philosophical Visions dramatically extends our sense of the fourteenth-century poet's philosophical interests and that Chaucer was well acquainted with late medieval English Scholasticism, this book offers new readings of four of his earliest major poems, the dream visions: th of the Duchess, the House of Fame, the Parliament of Fowls, and the Prologue to the Legend of Good Women. By resituating these poems within the genre of the'philosophical vision' (epitomized by Boethius's Consolation of Philosophy), these readings demonstrate Chaucer's interest in metaphysics, epistemology, and logic. Indeed, the only intellectual idiom available to Chaucer for exploring the way that the human mind works and the way that words work to express human reality was philosophical language, a language that Chaucer employed with the same technical acumen that he brought to other contemporary learned traditions, like astronomy and natural science. LYNCH is the Katharine Lee Bates and Sophie Chantal Hart Professor of English at Wellesley College, Massachusetts. This item is in the category "Books & Magazines\Books". The seller is "greatbookprices1" and is located in this country: US. This item can be shipped to North, South, or Latin America, all countries in Europe, Japan, Australia.