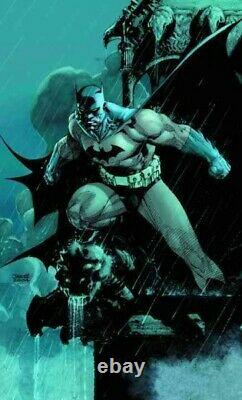 Absolute Batman Hush, Hardcover by Loeb, Jeph, ISBN 1401204260, ISBN-13 9781401204266, Brand New, Free P&P in the UK The complete 12-part saga written by Jeph Loeb (SUPERMAN/BATMAN, Smallville) with art by fan-favorites Jim Lee & Scott Williams (SUPERMAN, Uncanny X-Men) collected together for the first time in the oversized Absolute format! This slipcased edition includes BATMAN #608-619 as well as the the 2-page origin of Batman (originally seen only on) and the special story from Wizard: The Comics Magazine.

The year-long "Hush" &; an epic tale of friendship, trust, and betrayal that spans a lifetime &; reinvigorated the Dark Knight, pitting him against the deadliest members of his Rogue's Gallery and introducing his newest foe! This Absolute edition includes an all-new cover by Lee and Williams, a Jim Lee Sketchbook, and issue-by-issue commentary by the creative team! The item "Absolute Batman Hush, Hardcover by Loeb, Jeph, Brand New, Free P&P in the UK" is in sale since Friday, September 6, 2019. This item is in the category "Books, Comics & Magazines\Comic Books & Memorabilia\UK, Franco-Belgian & European Comics\Comics & Graphic Novels". The seller is "superbookdeals1" and is located in Castle Donington. This item can be shipped worldwide.