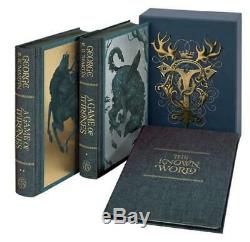 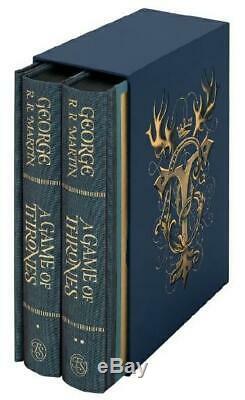 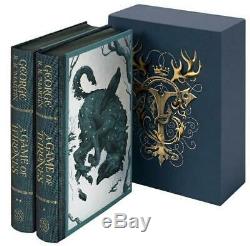 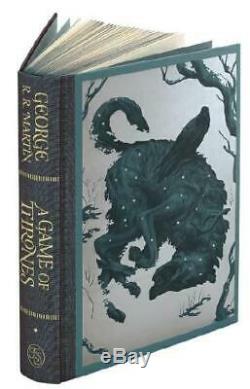 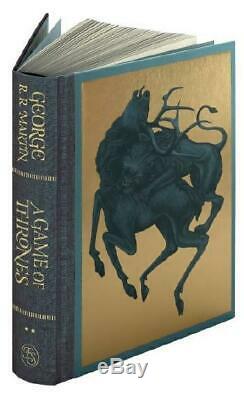 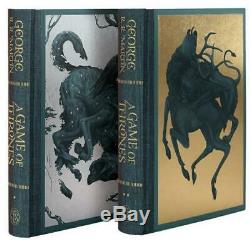 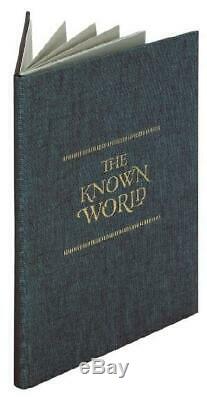 See Below A GAME OF THRONES by GEORGE R. MARTIN ILLUSTRATED by JONATHAN BURTON INTRODUCED by JOE ABERCROMBIE. The Folio Societys splendid new editions are masterpieces of the bookmakers art lavishly illustrated by Jonathan Burton. Book collectors and fantasy fans alike are going to delight in these volumes I know I will.

A publishing phenomenon; the biggest TV series in the world; a book that revolutionised a genre. A Game of Thrones is also, above and beyond all these things, a uniquely addictive piece of literature, claiming legions of fans and winning vast critical acclaim, and now The Folio Society presents the ultimate illustrated collectors edition. A story as epic as A Game of Thrones deserves an edition fit for the Iron Throne, and this lavish two-volume set drips with exquisite details.

Award-winning illustrator Jonathan Burton has provided a series of gorgeous colour illustrations that take the reader deeper into the realms of Westeros than ever before. His work can also be seen in the stunning binding designs, the chapter heading illustrations, and even in a special image hidden on the inside of the unique slipcase. In an exclusive introduction, celebrated fantasy author Joe Abercrombie delves into how the book changed the landscape of the fantasy genre, while family trees helping readers to keep their Lannisters separate from their Targaryens have been designed at the end of the novel, alongside newly drawn House sigils. This spectacular set includes a new colour map of The Known World, folding out to reveal the full splendour of George R.

As a small child, I fell in love with illustrated books, when Howard Pyle and N. Wyeth brought Robin Hood, King Arthur, and the Men of Iron alive for me with their art. Its a passion that has stayed with me all my life. A Game of Thrones is the first part in the sweeping A Song of Ice and Fire saga.

The series is epic fantasy in its truest sense, immersing the reader in a vast and detailed world, full of strange gods, dangerous magic and extraordinary landscapes; but it is also fantasy at its most modern, plotted with all the breakneck pace of a thriller and populated with diverse, complex characters that will win your heart and break it, all in the space of a few chapters. This magnificent set of A Game of Thrones is the first in a landmark series for The Folio Society.

About the Author George R. Martin is a celebrated author of fantasy, horror, and science-fiction stories and novels.

He began publishing short stories in science-fiction and fantasy magazines in the early 1970s, and his first novel, Dying of the Light , was published in 1977. The winner of multiple Nebula and Hugo Awards, as well as the 2012 World Fantasy Award for Life Achievement, Martin has also received three Emmy Awards for his work as a producer on the HBO adaptation of his Song of Ice and Fire novels, Game of Thrones. A Game of Thrones proved to me you could do something gritty, shocking and character-focused while still writing epic fantasy.

Im delighted to be providing an introduction to a book that was one of my biggest inspirations. Born in Lancaster in 1974, he studied Psychology at Manchester University before working in television production and then as a freelance film editor. During his time editing Abercrombie learnt about character development and storytelling, something that influenced him as he started writing fantasy fiction in 2002. His first novel, The Blade Itself, was published in 2006. He has since written eight more novels including Best Served Cold (2009) and Red Country (2012), as well as a collection of short stories entitled Sharp Ends (2016).

Abercrombie contributed to the BBC Worlds of Fantasy series in 2008, alongside literary legends Terry Pratchett and Michael Moorcock. In 2015, Abercrombie won a Locus Award for Best Young Adult Novel, for his book Half a King (2014). Citing A Game of Thrones (1996) as one of his most significant literary influences, Abercrombies newly commissioned introduction for The Folio Society was approved by George R.

About the Illustrator [Illustrating A Game of Thrones] became much more involved than I ever imagined with the universe of characters, costumes, settings and creatures all needing to be interpreted in an original way whilst being true to the book. I threw myself into this world 100% and relished in its rich and strange visual atmosphere bringing together medieval romanticism, dark drama and chilling horror.

Jonathan Burton has worked as an illustrator since 1999, after graduating with an MA from Kingston University, London. He has been awarded two silver medals from the Society of Illustration in New York, two Awards of Excellence from Communication Arts, and has received the Overall Professional Award for 2013 from the Association of Illustrators. For The Folio Society he has also illustrated Cover Her Face by P. James, Nineteen Eighty-Four by George Orwell, and the entire Hitchhikers series. He lives in Bordeaux, France.

I promise everything there is to know about this item is in this description. I also do not subscribe to "grading" as frankly, grading is totally inconsistent and most of the "graders" TRULY have no clue, so I will use plain English if it is OK with you... A brand new hardcover set of books in EXCELLENT condition, with original slipcase as issued. Bound in three-quarter blocked cloth with a printed and blocked cloth front board and set in Vendetta with Esmeralda as display.

824 pages in total over two volumes 6 full page and 2 double-page colour illustrations per volume. Printed in black and gold throughout 8 illustrated chapter openers and 9 illustrated house sigils 9 family trees in volume two. Fold-out map inserted in case, bound in blocked cloth and printed endpapers with coloured tops and is blocked and printed slipcase with printed illustration inside.

It measures approximately 10 x 6¾ and is a GORGEOUS copy! There are links above and below and why not bookmark my site to make it easier to find at a later date! Pay me, I send it, BUT ONLY TO A REGISTERED ADDRESS! I really DO CARE about when and how your product gets to you. Instead, select ADD TO CART. I accept Credit Cards, eChecks and electronic transfers with. Unfortunately, direct bank transfers are not offered due to cost and security concerns.

As I reside in the USA, all payments must be made in US Dollars & Cents. PLEASE remember this when you leave feedback scores as the choice is yours and not my fault if it takes a long time to get there! International deliveries usually arrive within 1-2 weeks but CAN take up to a month!

Finally, we do not mark merchandise values below value or mark items as "gifts"; it is illegal and immoral. Ask and I'll try to answer.. Please check out the other "lovely" items I have just waiting for you by. The item "A GAME OF THRONES GEORGE RR MARTIN FOLIO SOCIETY ILLUS BRAND NEW" is in sale since Wednesday, October 2, 2019. This item is in the category "Books\Fiction & Literature".

The seller is "alan-53" and is located in Walnut, California. This item can be shipped worldwide.